The Cause of Artery Disease

The cause of heart attack and stroke is bad cholesterol that becomes trapped in the wall of the artery. It becomes so inflamed by the body’s clean-up process, that toxic side effects of inflammation kill the smooth cells that line the artery, causing a rough spot. Blood cells stick to the rough spot causing a clot, that fills the artery within seconds. Both the cholesterol and inflammation that make up artery disease, thicken a layer in the artery wall called the intima-media. Uncontrolled inflammation continues to thicken the IMT, but controlled inflammation does not, and is much less likely to kill the smooth lining cells. Plaque, is a localized mound of artery wall cholesterol inflammation, that is at least 1.3 mm thick, which further greatly increases the risk of heart attack or stroke, beyond the background IMT.

It follows that one of the first structural changes that can be detected non-invasively in artery disease is an increase in IMT, which can be very accurately measured using harmless sound waves, by a special high frequency ultrasound, called an IMT/Plaque ultrasound. This is an FDA approved test that measures the thickness of the two innermost layers (intima and media) of the walls of the carotid artery (located in the neck). Our ultrasound provider’s proven reproducibility also allows for year over year comparisons enabling treatment decisions based on IMT changes10. Having the average progression of thickening of the IMT creates a one in three chance of dying from heart attack or stroke, lifetime (between 29 and 38%3). A normal IMT (less than 0.6 mm thick), results in a 1 in 800 chance of having a heart attack, over 10 years3.

IMT/Plaque Ultrasound is one of the only tests to find artery disease at a stage in which it can be stopped before plaque (high risk thickening) occurs, and when the disease is much more likely to be reversible. An abnormal IMT/plaque ultrasound preceded 98.6% of heart attacks in one study of 10,000 patients over 10 years3, compared to 29% preceded by high bad cholesterol in a study of 137,000 patients4. This is because it is a measure of how much artery wall disease you have at the present time and shows you how bad it is, whereas your cholesterol level is a risk factor, that can only be used to calculate a statistical chance that you may get a heart attack in the future. While we use the IMT/plaque ultrasound for disease detection, and not for heart attack risk prediction, another study did find that a very high IMT/plaque ultrasound score indicated seven times more risk than is predicted by all other risk factors combined (cholesterol, blood pressure, diabetes, smoking weight, exercise and alcohol) for women, and twice the risk for men5. In addition to the detection of atherosclerosis, the IMT/Plaque ultrasound has proven invaluable in treatment assessment. Studies have found that patients’ artery disease can progress, even after their cholesterol level is controlled by medication, doubling the chance of heart attack and stroke. By adding treatment, regardless of cholesterol levels, until the ultrasound showed that the disease had stopped thickening the artery wall plaque, the rate of heart attack, stroke or death was reduced by two thirds5. (See Figure 2). In addition, 50% of patients’ artery wall disease decreased (became less thick) by this approach of treating the artery instead of just treating risk factors, such as cholesterol levels and blood pressure, compared to a 25% regression rate when only treating until those risk factors reached treatment guidelines. 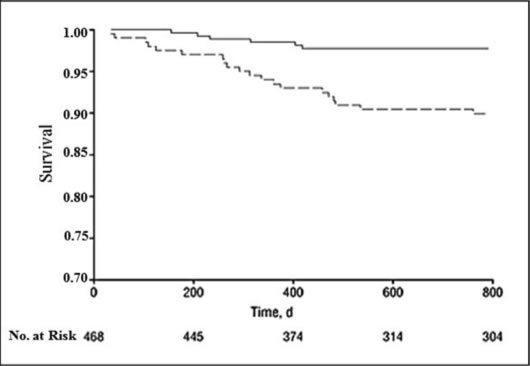 Who should have the IMT/Plaque Ultrasound?

This screening test can be performed between the ages of 25 and 80. It generally should be considered in South Asian men and women over age 25, because according to a recently published Lifetime Risk model for South Asians, two in three men, and one in two women had high lifetime predicted risks for cardiovascular disease, often beginning at age 2011. In non-South Asian groups, the IMT/plaque ultrasound should be performed for men over 45 and women over 50. Risk factors include:

The above risk factors as well as aging are contributing factors to an increased carotid intima-media thickness as well as risk for heart attack and stroke.

At Cogent Family Healthcare, if, following an IMT ultrasound, artery disease is found, your condition is further assessed using blood tests that measure factors that contribute to artery wall inflammation. Each factor responds more favorably to different treatment interventions, so the blood test enables us to determine the optimal treatment plan for you. Our treatment of abnormal inflammatory components frequently results in resolution to normal in 6 to 12 weeks.

Inflammation Analysis: Inflammation analysis covers a variety of inflammatory markers, the most notable being myeloperoxidase (MPO), an enzyme that has been found to be to play a role in the inflammation in the artery wall. Multiple studies show that the plaque in the artery walls contains large amounts of MPO. This is especially true in places that are prone to rupture and can lead to heart attacks. Higher inflammation means that you are at a higher risk of having a heart attack. Studies show that, among patients with chest pain, an increased MPO level can predict their risk of heart attack over the next 30 days to six months. In other, longer studies involving middle-aged patients who were assumed to be healthy, an elevated MPO level predicted the risk of heart attack over two to 10 years.

Cardio Metabolic Analysis: A cardio metabolic analysis covers the three main areas of keeping a healthy metabolic profile: Glycemic Control, Lipid Profile, and Vascular Inflammation. While cholesterol testing has historically been used as the standard indicator for cardiovascular disease, up to 71% of people who have suffered heart attacks had “normal” cholesterol levels. This discrepancy is because it is the lipoprotein particles that carry the cholesterol particles throughout the body, not necessarily the cholesterol within them, that are responsible for key steps in plaque production and the resulting development of cardiovascular disease. At Cogent Family Healthcare, we provide advanced cholesterol testing technology that accurately measures both the density and number of lipoprotein particles. More than 30 percent of the population has a condition in which a patient’s cholesterol may be “normal” but their lipoprotein particle number, and hence, their actual risk, could be much higher than expected. Measuring the lipoprotein subgroups and other inflammatory factors, is the only way to evaluate such risk factors, which is crucial for an accurate assessment of cardiovascular risk, and the establishment of an effective treatment program.

We use the results of your IMT/Plaque ultrasound, your blood tests and genetic panel in combination with your cardiac risk factors, to create an effective treatment plan that may include lifestyle changes, supplements and/or medications, with the aim of:

Furthermore, it allows us to monitor your progress as we aggressively treat your cardiovascular disease. We can document improvements or progression and make appropriate adjustments to help you reduce your risk of a heart attack or stroke.

How Does IMT/Plaque Ultrasound Compare to Other Tests?

What to Expect During the IMT/Plaque Ultrasound Test

If you’re at risk for cardiovascular disease, contact Dr. Sims today to schedule your artery wall evaluation. This quick, painless, FDA-approved test could save your life! Call Cogent Family Healthcare in Mountain View, California at (650) 386-0386.

Office Hours
Get in touch